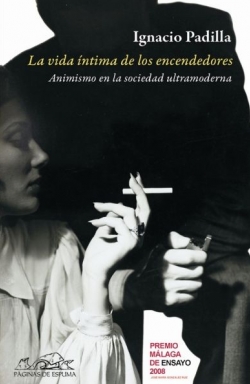 In the perpetual gesture—as well as symbolic— that the man lights the woman’s cigarette rests the animist fiction: with this cylinder in-between her fingers, the lady awaits for the lighter to literally light her up. The apology of the lighter’s soul boils in the mind of a significant chunk of humanity ready to attribute a life of its own to inanimate objects.

Against scientific evidence and the demonization of thought known erroneously as superstition, contemporary society cannot quite come to terms with the death of the soul of objects, in the same way it is unable to renounce to the defensive mechanisms that fiction, imagination and faith offer us; and the suggestion that, like animism, at some point they showed their efficiency to endure the bewilderment, tension, fear and the growing loneliness that the material universe provokes.

Faced with the impassiveness of things, modern man turns to animist fiction, because the logic still is insufficient to unravel the most ancient mysteries that those provoke. If we were to renounce to believe in divinity, in the life of objects or in the soul of animals, we would be left defenseless before inert matter. Before accepting cosmic solitude, ultra modern man’s magical thinking prefers to assume that objects are alive, and thus as a result they are treated or mistreated. We resist to go into mystery’s refractory maturity, we still reject the idea that the other is not alive. To define the roots of the how, the why and even the where of the animist’s eagerness of ultramodern society is what in the bottom animates this book.