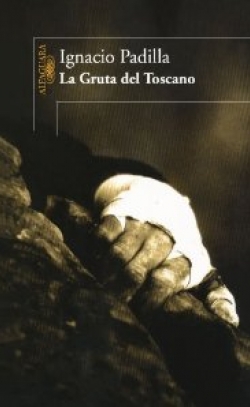 Year: 2006
Editorial: Alfaguara
Language: Español, Catalán
Published at: Companhia das Letras (Brazil), Giunti (Italy), Mir Knigi (Russia), Recorded Books (USA)
Synopsis: From his hut at the skirts of the Himalaya, the sherpa Pasang Nuru witnesses how, year after year, expeditions of alpinists arrive to try the conquest of the Mountains. All expeditions end up paying a price for fighting against cold weather and high altitudes. Many alpinists come back mutilated by gangrene, blinded by the snow, or simply delirious. But none of these perils dissuades them from insisting in their desire to be the first ones to enter the dangerous and unknown Cave of the Toscan, which could be where the nine circles of Dante’s Inferno are waiting to be discovered.

Adventurers say their motives to face such a dangerous exploration are extremely transcendent: national honour, divinity, the conquest of last frontiers, immortality and the dominium of nature’s forces… But after all, humanity doesn’t seem better, or more divine, or richer just because a group of men has stepped in this or that circle of hell. What pushes them forward, then? Where does that invincible impulse towards death come from? The telling of those expeditions may give some answers but, in any case, it explores the conviction that there’s a single essential thing to reach the heart of darkness and telling how it is like: human rancour, resentment.