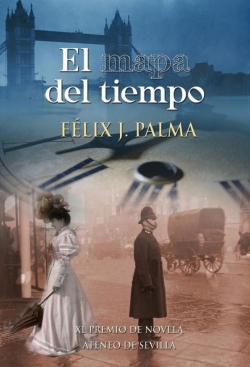 “The Map of Time is not only the best of the Ateneo de Sevilla Award in its 40 editions… it is not only a milestone that transcends the Victorian fantasy genre called Steampunk… It’s a heck of a novel of temporal paradoxes, scientific dreams, literary myths and love stories with no expiration date, which will remain imbued in the reader’s mind.”

“This Félix J. Palma can be considered a book of post-modern adventures. It possesses a plot skillfully built, intelligent dialogues and a magnificent resolution. The result, apart from being pleasurable, comes close to excellence.”

Set in Victorian London with characters real and imaginary (including Alan Quartermain, Jack the Ripper, Jules Verne, and the Elephant Man), the novel boasts a triple-play of intertwined plots in which a skeptical H.G. Wells is called upon to investigate reported incidents of time-travel, imagined or real, and thereby save the lives of an aristocrat in love with a murdered prostitute from the past; of a woman bent on fleeing the structures of Victorian society by searching for her lover somewhere in the future; and of his very own wife, who may have become a pawn in a 4th-dimensional plot to murder Henry James, Bram Stoker, and the author of The Time Machine and The War of the Worlds, himself, in order to alter their identities and steal their fictional creations.