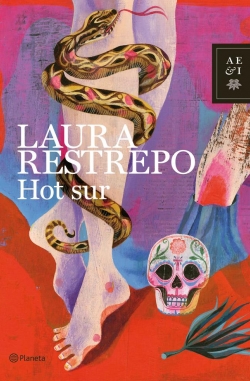 From revered Colombian writer Laura Restrepo comes the smart, thrilling story of a young woman trying to outrun a nightmare.

María Paz is a young Latina who, like many others, has reached the United States in search of utopia. But her American dream turns into a nightmare when she is accused of murdering her husband, a white policeman, and is sent to jail.

However, María Paz’s life will take a most dramatic turn when she discovers that the true horror, that which will put her mettle to the test, awaits her on the outside. Laura Restrepo’s action-packed thriller grips us from the very first page. Beautifully put together and although terrifying, also great fun. A tribute to women, and a biting critique to the western world’s capitalist system and its fake dreams of prosperity.

“Restrepo’s newest work deals with the perils and shattered hopes of the immigrant journey...HOT SUR [Hot South] carries a disturbing dedication: “To Javier, who spends the days of his life in a U.S. jail.”  That’s a pretty blunt and compelling way of opening a book.  But if you’re familiar with Restrepo’s previous novels, several of which have been published in English…you know that she specializes in hooking readers from the first page with dramatic set-ups that could’ve been lifted from a crime thriller or a telenovela.  Then her taut, nuanced, ironic narratives quickly reel you in to confront the starkest and darkest of current realities: warfare, drug violence, desperate urban poverty, the embattled and fragmented modern Self.”  --Reed Johnson, Los Angeles Times (USA)

“In HOT SUR there is no lack of crime, mystery and violence.  Ingredients that encapsulate one of the novel’s protagonists, Sleepy Joe, whose mystical obsessions lead him to practice pseudo-religious sexual rites while he sacrifices his victims.” --El Informador (Mexico)

“Restrepo reminds us that sometimes paradise can be found in hell.  Or, in this particular case: hell, in paradise.  The author has conjured up just such a world in HOT SUR through the physical and emotional ordeals of those who leave their places of origin behind in search of better opportunities.  Her point of departure was the case of Javier, a man serving a life sentence in a U.S. prison, but in her novel it’s the story of María Paz, who goes after the American dream, which can be extrapolated to Europe as well.” --El País (Spain)

“[Restrepo] is mesmerizing with this terrifying but magnificently constructed thriller, at times damning but also surprisingly comic.  A hymn to El Sur, to women, and to all marginalized individuals, as well as a fearless indictment of the smoke and mirrors of prosperity.” ---www.revistakritica

“HOT SUR is a terrifying and sad mosaic of the price of dreams in the contemporary world…but as much a celebration of life with the tempo of a thriller as a novel excoriating systems that erect walls to the detriment of millions of immigrants.“ --Babelia (Spain)

“For those of us who have followed her career as a writer, the pleasures of reading [Restrepo’s] latest novel inspire profound emotions, in addition to leading us to confront our most intimate self, but this is precisely what good literature manages to accomplish … HOT SUR is a culminating moment and a luminous step in that career.  We find ourselves in the presence of what Vargas Llosa has defined as --referring to One Hundred Years of Solitude-- a ‘total novel’:  total in the sense of those dementedly ambitious literary creations that compete with reality itself.” --Carmiña Navia, El País (Colombia)