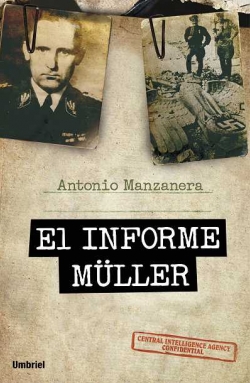 Year: 2013
Editorial: Umbriel
Collection: Umbriel Thriller
Literary Category: action and adventure
Language: Español, Catalán
ISBN: 978-84-92915-23-1
Format: Paperback with flaps
Pages: 352
Published at: España
Synopsis: In the midst of the Cold War, the M16 urgently summons the historian Hugh Trevor-Roper so that he, together with Oughton, an enigmatic CIA agent, investigate the death of Heinrich Müller, a double agent and ex SS general. The tension between the agents is at its maximum and more than reveal the assassin, both the CIA and the M16 are more interested in knowing which of the two organizations is more contaminated with double agents and spies. But the investigations reveal something else; Müller was the only person able to reveal the truth behind the death of the Nazi leader. And it would seem he didn’t take the secret with him to his grave. Somewhere he left a report revealing one of the most imperative mysteries of the century, as well as revealing the tangled plot of counter-espionage between the secret services.

Based on real events and backed-up by impressing documentation, The Müller Report is Antonio Manzanera’s impacting debut in fiction, a novel regarding one of the biggest lies in recent history.