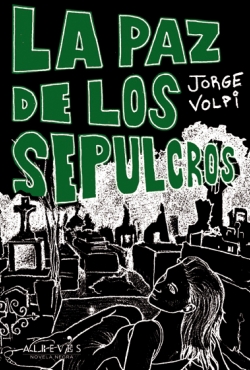 Year: 2013
Editorial: Editorial Alrevés
Collection: Novela negra
Literary Category: police, black and suspense
Language: Español, Catalán
ISBN: 9788415098843
Format: Softcover
Pages: 250
Published at: México, España
Synopsis: The Discovery of the lifeless body of Alberto Navarro, Mexico’s Minister of the Interior and the country’s possible presidential candidate, beside the body of an unknown man in a hotel room in the outskirts of the Mexican capital, unsettles a society that unfortunately is used to the corruption and despotism of its leaders, the abuses of its army and the bloody violence of its drug cartels and delinquents. But for Agustín Oropeza, yellow press journalist, the double murder goes beyond an exclusive for the Tribuna del escándalo (Tribune for Scandal), when he recognizes the body of the man who lost his life beside that of the murdered minister.

With a reflexive and masterly style which typifies Jorge Volpi, and without omitting Mexico’s crushing reality, the author takes us by the hand of Oropeza deep into the underworld of child prostitution, corrupt civil servants and a night life full of drugs and a frenetic sexual activity that lives side by side with a society that lives in fear, bewilderment and an appetite for all that is morbid. These are desolate times in which one must wonder what is happening in high places and what does the political reality hide. Novel published for the first time in 1995 and reissued in 2007 by Editorial Planeta, Mexico and 2013 by Editorial Alrevés, Spain.