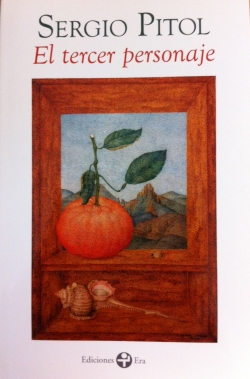 Year: 2013
Editorial: Ediciones Era
Literary Category: essays
Language: Español, Catalán
ISBN: 9786074453065
Format: Paperback with flaps
Pages: 271
Published at: México
Synopsis: Since the publication in 1996 of “The Art of the Fugue”, Sergio Pitol’s collection of essays have become a gallery of images that, in the manner of the great Gothic stainglass windows, reveal in the sum of its fragments the story of a vocation, the patient accumulation of frontiers that ensure a distinctive style.

Inventory of intuitions and reminiscences, of obsessions and phobias, this book is proof of a life strewn and narrated from a literary stance, the traits that make-up a reader’s itinerary. Pitol has sheltered his work under the aegis of an idea in where the less visible elements of memory and the imagination work in tandem to reach unsparing organic structures. Here, biographical sketches, book reviews and conferences smoothly mix with vertiginous ease, to the scrutiny of the very stirrings lodged in the marrow of literature itself, from whence it leaps toward political thought, to a commentary on a work of art or the problem of identity in Latin America.

Written throughout the past two decades, this volume of essays constitute the bifurcations of a vast geneology of affinities. To the Cervantes, Dickens, Galdós, Virginia Woolfs and Chekovs –recurring names that populate Pilot’s essential library–, are now added to those of Carlos Fuentes, Fernandez de Lozardi, Monterroso, Pacheco, Aira and Bellatin, as well cinema, Polish fiction, the editorial project of the publishing houses Tusquets and Anagrama; the painting of Juan Soriano, Rufino Tamayo and Vicente Rojo; the ceramics of Gustavo Pérez and detective novels—all different faces with which the third character that inhabits these pages appears and disappears.