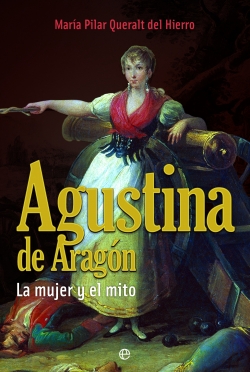 Year: 2008
Editorial: La Esfera de los libros
Language: Español, Catalán
Synopsis: Zaragoza (Spain), July 1808. A woman a little over the age of 20 pulls the linstock from the hands of a dead gunner and fires the cannon this one had at his charge. Her intervention, as daring as it is risky, forced the French troops that threatened the Zaragozan Puerta del Puertillo, and allowed General Palafox to rebuild the defense. The woman was born in Barcelona in 1768, and her name was Agustina Saragossa and would go down in history as Agustina of Aragón.

Little else is known of her. Myth turns her into one of the most popular heroines of the War of Independence but, after her heroic deed and receiving from the Crown, title and wages as Second Infantry Lieutenant in recognition for her bravery, her name is lost to history. Whatever happened to Agustina after the military campaign? Furthermore, what was the young wife of an artilleryman, who at the time was in Belchite on operations, doing in Zaragoza? Since when do her remains lie in Zaragoza if she died in Ceuta? In light of the existing documentation and the tradition, María Pilar Queralt del Hierro answers these and other question, and recreates the vital adventures of a woman shrouded in the mist of legend, and as backdrop the fascinating and passionate Spain, which lived one of its history’s greatest political and social convulsions.