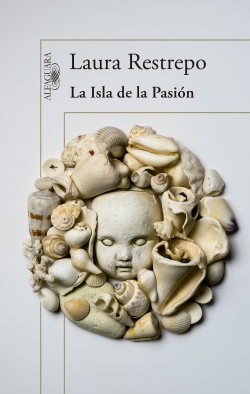 Base on true events, this brilliantly rendered novel recounts a dramatic tale of survival, and a woman’s determination to triumph over a harrowing fate.

In 1908, Mexican captain Ramón Arnaud and his young bride, Alicia, set sail for Clipperton, a tiny Pacific atoll once dubbed "Isle of Passion" by Spanish explorers. Accompanied by eleven soldiers and their families, the captain is under orders to defend the isolated but strategically well situated island against an improbable French invasion. With its treacherous coral reef and stagnant lagoon, Clipperton is a dire, forbidding place for the new inhabitants. Rigid military order soon gives way to more informal island living, but under Ramón's guidance and inspired by Alicia's determination the group manages to create a viable community. There are a food store, pharmacy, lighthouse, even dinner parties. But then, amid political upheaval at home and the first rumblings of World War I, the Clipperton residents are forgotten. The supply ship slated to come every two months comes every third, then sixth, then not at all. Left to the mercies of nature and each other, they fall victim one by one to scurvy, hunger, despair, rivalry, lust and, ultimately, violence.

Alicia, steadfast and resourceful, becomes a beacon of strength for the remaining castaways, whose collective survival will depend upon her courage and cunning. Drawing on historical records, archives and interviews, prize-winning novelist Laura Restrepo has reimagined the incredible true story of love and war, hardship and endurance, adventure and hope on the Isle of Passion. In prose that is lush, evocative and utterly beguiling, she brings to life a bizarre, moving episode in Mexican history and its extraordinary, unforgettable heroine.

“Arguably her best: a ripping yarn...vivid and entertaining.” --Kirkus

“In its brutal isolation, the island lives up to its name, with every possible human passion, from love and lust to hate and greed, coming to the fore...This extraordinarily gripping novel communicates surprising lessons on the human condition.” --Library Journal (starred review)

“With her new work, the author Laura Restrepo has conjured up the isolated but legendary Clipperton Island and converted it into a coveted destination: they travel there, one after another, the many readers of her novel, buoyed up by her imagination, seduced by the tale of heroism, dignity, tragedy, and love that fills its pages."  --La Vanguardia (Mexico)

“She pulls the various elements together with a clear, no-nonsense cartographer’s precision, and the result is smooth sailing indeed.” --Publishers Weekly

“Restrepo charts a wide and intense range of human experience in this compelling story of castaways.”--Washington Post Book World

“This isn’t just a tale of love, war, and adventures....  [Isle of Passion is] a gem --a veritable gem-- which places its author among the heavyweights of Colombian literature.” --El Espectador (Colombia)

“Her intriguing novel [is] a cautionary tale of adventure, primal human behavior and the erosion of social order.  Elements of magical realism give Restrepo's finely wrought work an ethereal quality, offsetting her stark portrayal of humankind's capacity for cruelty.” --Cleveland Plain Dealer

“Restrepo’s signature narrator, an unnamed reporter, is debuted and put to good use here, as the pieces to this adventure tale are eerily assembled in the suspenseful tradition of The Lord of the Flies.” --Críticas (starred review)