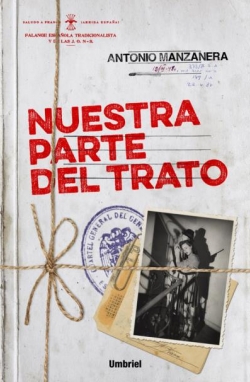 Year: 2015
Editorial: Umbriel
Literary Category: historical fiction
Language: Español, Catalán
ISBN: 9788492915491
Pages: 282
Synopsis: In the summer of 1930, during The Battle of Ebro, a mysterious character named Urquiza is sent to Barcelona to Franco’s headquarters to participate in the attack organized by a group of militants from the Worker’s party of Marxist Unification against the president of the government of the Republic, Juan Negrín. Upon arrival in Barcelona, Urquiza will soon discover a more powerful reason to explain his presence in the city. Pursued by both political sides and with only the help of Núria, a woman in search of her boyfriend who disappeared on the warfront, he will attempt to accomplish his most risky mission: to survive.

The new novel of political intrigue by Antonio Mazanera, author of the bestseller El informe de Müller, this time digs deep into the Spanish Civil War, for which he provides explanations of various mysteries through fictional characters, even without resolution within those that participated in the intelligence services of both parties.