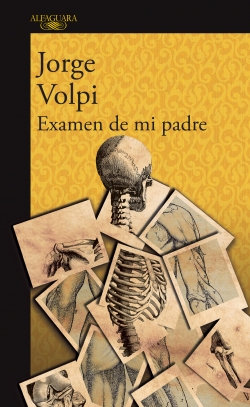 Year: 2016
Editorial: Alfaguara
Literary Category: essays
Language: Español, Catalán
ISBN: 9786073146067
Pages: 296
Published at: Alfaguara (Spain)
Synopsis: “My father died on August 2, 2014. He had told us that when his mother died he remained in mourning for one full year in which he never stopped wearing a black tie. I decided to return to my literary mourning and dedicated 2015 to a book that allowed me to remember him. I wrote ten essays throughout a period of ten months: responding to his role as a surgeon, at first I only knew that each essay should make reference to a body part, as well as to its cultural and political metaphors.

The most intimate book that I’ve ever written also became a public exam: an autopsy of our country, with a special emphasis on the war on drugs, the mass kidnapping of Ayotzinapa, the fire at the ABC kindergarten or the problems derived from migration, and with the presence of some emblematic figures of those years of lead, in a spectrum that goes from Marcial Maciel to Mamá Rosa. These pages aspire to be a memory of my father and of my relationship with him, a digression in relation to the body and to our degraded social body and, in a last instance, a requiem for this country of mine, yours, ours, full of ghosts and corpses.”