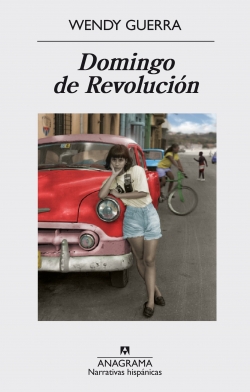 Year: 2016
Editorial: Anagrama
Language: Español, Catalán
ISBN: 978-84-339-9810-1
Pages: 224
Published at: Buchet Chastel (France), Elliot Edizioni (Italy), Melville House (English World), Bokvennen (Norway), De Geus (The Netherlands), Kastaniotis (Greece)
Synopsis: This is the story of Cleo, a Young poet and resident of La Habana, an author under suspicion. The Security of the State and the Ministry of Culture believe that her success has been constructed by “the enemy” like a destabilization arm, an invention of the CIA. For a certain group of exiled intellectuals, however, Cleo is, with their critical pretensions, a Cuban intelligence spy.

Trapped in this movement of thoughts, forbidden and ignored in Cuba, Cleo is the controversial but successful writer translated into multiple languages that shakes those who read her outside of the island. Her texts narrate the end of a large revolutionary process of almost 70 years. The Sunday of an intense week of revolution that has already met two centuries. Closed off in a beautiful mansion in El Vedado, under the brilliant light of a city trapped in time, Cleo has an emotional adventure with a Hollywood actor at the same time as she “discovers” her parents and resists in a country that blames her for her great sin: writing what she thinks.

While Wendy Guerra was creating this fiction in La Habana, reality started to creep in, modifying the plot and intervening in it, contaminating, with its historical processes, the dramatic events that are narrated here in real time. With this novel, Guerra proves herself as one of the most sophisticated and clever Latin-American authors in the structure of her stories. A work marked by the sharp humor with which she hints at the Cuban tragedy, for the ease with which she describes, without judgement, a reality that she knows by heart, and for the sonorous language with which she invokes a besieged city with music, the sea, and every-day politics.