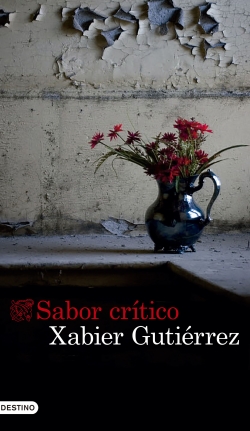 Year: 2017
Editorial: Destino
Literary Category: police, black and suspense
Language: Español, Catalán
Pages: 544
Synopsis: The original creator of gastronomic noir, Xabi Gutiérrez, once more makes us shudder with a new crime that needs to be solved. This time around of dead food critic.

A year has elapsed since Ferdinadn Cubillo was shot dead, a renowned food critic from the Basque Country. The Ertzaintza’s Deputy Superintendent, Vicente Parra and his team were at the time in charge of interrogating those who could have been related to the crime. But the investigation has turned out to be, till now, unsuccessful. Still, Vicente Parra will not give up in his resolve to clarify what happened in a case that, besides the murder of Ferni, is related to some events that took place more than thirty years earlier.

Parra wants reopen the case, and just then other murders occur that seem related with that of Ferdinand Cubillo. On the one hand these crimes complicate the investigation, but on the other, can help the deputy superintendent resolve once and for all the death of Ferdinand Cubillo and, without even setting out to do so, unravel a mystery that had been hidden almost for forty years.