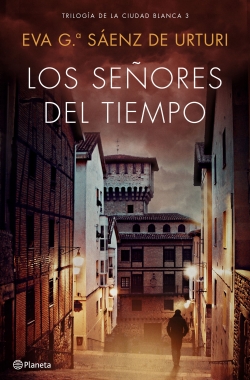 Vitoria, 1192. Diago Vela, the legendary Count Don Vela, returns to his burg after a two-year dangerous mission entrusted to him by King Sancho VI, The Wise of Navarre, and finds his brother Nagorno married to who had been his bride, the noble and intriguing Onneca de Maestu.

Unai López de Ayala, “Kraken”, is faced with some disconcerting deaths that follow a medieval modus operandi. They are identical to the murders described in the novel The Lords of Time: a poisoning with the “Spanish fly” —the medieval Viagra—, walled-up victims as was done in the past in the “vow of darkness” and “vatting”, which consisted of throwing a prisoner locked in a barrel along with a cock, a dog, a cat and a viper.

The investigations will lead “Kraken” till the Lord of the Tower of Nograro, a fortified tower-house, uninterruptedly inhabited for the last one thousand years by the first male born. But the flip side of so much nobility is the tendency of the lords of the tower to suffer from multiple identity disorder, a detail that will lead Estíbaliz to live a risky love story.

Unai Lópes de Ayala will end up discovering that The Lords of Time has a lot in common with his own past. And this discovery will change his life and that of his family.