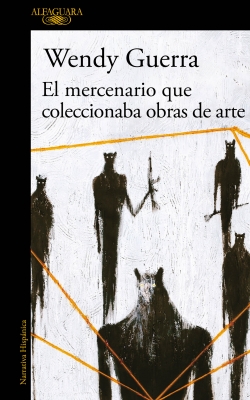 Year: 2018
Editorial: Alfaguara
Language: Español, Catalán
ISBN: 9786073173568
Format: Paperback with flaps
Pages: 344
Synopsis: The  charismatic mercenary who narrates this story is a real character under the pseudonym Adrián Falcón, although throughout his active years he used others, such as El Parse, Garfio, Strelkinov ... Tender and diabolical, Falcón is now in his sixties and has survived his complex life story with a peculiar sense of humor. One must keep in mind that he was persecuted in the United States and in several Latin American countries for terrorism, was the linchpin of cases as scandalous as the Iran-Contra, and operated with the Colombian cartels to finance counterrevolutionary actions. Considering himself a "freedom fighter", he fought against the command of the Soviet Union, Sandinismo and Fidel Castro.

Although at one point he was the FBI's target, he ends his fighting days as a condottiero for the CIA and unbelieving of everything. Disenchantment leads him to fight for his fate and to find an ally in Valentina, whom he meets in Paris and with whom he begins a relationship of interests; in her own way, she is too a survivor mercenary.

This work offers a point of reference for those who wonder about the enemies that the Latin American left faced, and is the result of interviews with Falcon and the study of files carried out by Wendy Guerra, daughter of guerrilla idealism who has jumped the fence to take a look at the other side.

What the critics have said about the author and her work:

"'Everyone leaves is one of the great sentimental educations of Latin American literature." Christopher Domínguez Michael, Letras Libres

«Nirvana del Risco is the first black Cuban heroine who is depicted naked, open and blatant before what many hide because of prejudices: bisexuality, racism, politics, fear and close intimacy with the enemy# The tragic fate of this heroin narrates a sensitive and little explored part of Latin American women's literature. With a magical and contemporary language, the author invites us to a unique journey bathed by sublime black tears.» (Sobre Negra) Viceversa

«Sunday of Revolution moves between autobiography and metafiction, between the anguish of the writer and the examination of the construction of her work. This novel is even more incisive than all the rest that Wendy Guerra had written earlier." Maikel Ramírez, oigopalabra