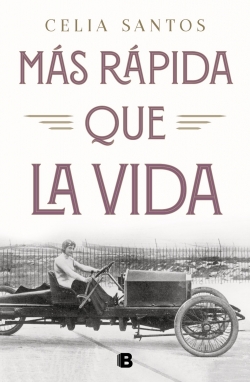 Year: 2020
Editorial: EDICIONES B
Language:
ISBN: 9788466666992
Format: Hardcover
Pages: 304
Synopsis: London, 1903. Dorothy Levitt shoots to fame after becoming the first racing driver in the United Kingdom and one of the world's first. The photographs of her behind the wheel of her car appear on the front page of newspapers. At a time when driving belonged to a man's world, this exploit is met with disdain and even with threats. Many fear that Levitt's example will encourage other women to learn how to drive or, even worse, to be independent.

Writer Celia Santos broaches the thrilling life of a woman ahead of her time who broke all prejudices. Unjustly forgotten, Levitt invented the rearview mirror, inspiring herself on the powder compact she used to see who followed her in the races, taught the British aristocrats of the period how to drive and was involved in the suffrage movement.

A betrayal, a love and a great friendship will accompany Dorothy throughout all of her successes and difficulties, always in a fascinating scenario: the England of the early twentieth century, when the memory of the Victorian era was tied to an incipient modernity.