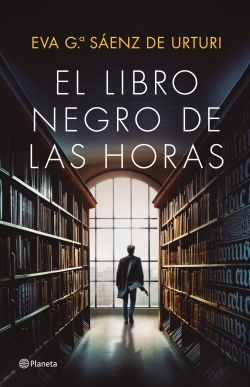 What if your mother was the best forger of ancient books in history?

Someone who’s been dead forty years can’t be kidnapped and, surely, cannot bleed.

Vitoria, 2022. Former inspector Unai López de Ayala —aka Kraken— receives an anonymous call that will change what he thinks he knows about his family’s past: he has one week to find the legendary “Black Book of Hours”, an rare bibliographical jewel, otherwise, his mother, who has been buried in the cemetery for decades, will die.

How is this possible?

A race against the clock by bibliophiles between the cities of Vitoria and Madrid, to sketch the most important criminal profile of his life, one capable of modifying the past, for good.

The Black Book of Hours marks the return of Kraken, the mythical character who, in 2016, began the saga with The Silence of the White City, followed by The Water Rituals and The Lords of Time. A bestseller ever since it was first published, the trilogy has had more than 100 editions, and appeared in more than twenty countries, including the USA, France, Germany, Italy, Poland, Mexico, Argentina or Brazil, as well as having a film adaptation directed by Daniel Calparsoro.