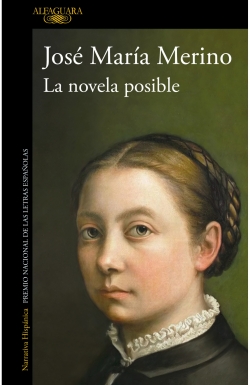 “I could have never imagined that someone would help me from such a distant past...”

Forgotten for centuries, eclipsed by male artists to whom her paintings were attributed to, when in fact they were a product of her genius. Sofonisba Anguissola was an extraordinary painter who, without pictorial training or academic knowledge of anatomy, specialized in portraiture and self-portraiture, achieving great success in her time and, once settled in Spain, had strong connections with the court of Felipe II.

José María Merino narrates in "The Possible Novel" the life of this painter with historical accuracy, but also with all the captivating possibilities that fiction permits. And the story of this dazzling woman and her time is intertwined with two other lives, set in the present: that of the writer himself who, during confinement, writes a diary in which he records those uncertain days and how the seed of fascination for the figure of Sofonisba is inoculated in him; and that of a librarian, who also finds in the Renaissance painter a haven where she can take refuge in the midst of a breakup.

In this novel the two periods are skillfully blended, the present time and the Renaissance, reality and imagination, biography with autobiography and fiction, and literature with art.

"[We emphasize] his skillfulness and quality in the creation of fantastic literature in the modalities of fiction, novel, short story and flash fiction, as well as the intelligence of his theoretical reflections on fiction. A role model for successive generations." Jury of the Premio Nacional de las Letras

"For decades, he has produced original literature of creative mystification, a chronicle of those other worlds that also exist even though they are in this one." Jesus Ferrer, La Razón