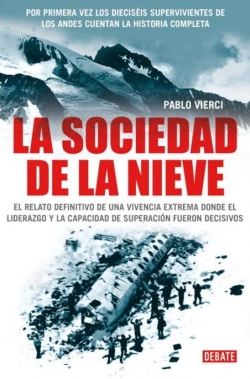 In October 1972, a plane took off from Uruguay carrying a team of young rugby players and their families and friends, headed for a match in Santiago, Chile.As weather conditions grew increasingly hazardous ap-proaching the Andes, the pilots were forced to make an emergency landing in Argentina to wait out the storm. When conditions improved the next day, they took off once again, but due to a miscalculation, their plane was unable to clear the mountains and ended up crashing directly into them. After a fruitless eleven-day search, all forty-five passengers were presumed dead and the res-cue operation was called off.

Meanwhile, on a remote mountainside, amid the wreck-age of the plane and the corpses strewn about, a group of survivors emerged to fight a dire battle for survival. For 72 days they suffered deprivations beyond imagin-ing, confronting nature head-on at its most furious and inhospitable, stranded on a lifeless glacier nearly 12,000 feet above sea level with no supplies or means of summoning help. As they struggled to endure the bru-tal temperatures, the deadly avalanches, and the loss of friends and family, they soon had to face the devastating realization that the search for them had been called off.In order to survive, they were forced to do what would have once been unthinkable.

Their story is a testament to the strength of faith and friendship, and the resilience of the human spirit.