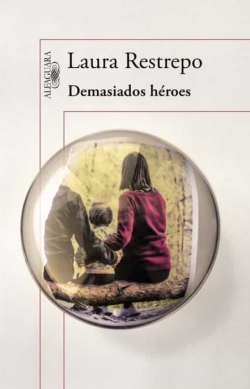 From one of the most accomplished writers to emerge from Latin America, No Place for Heroes is a darkly comic novel about a mother and son who return to Buenos Aires in search of her former lover, whom she met during Argentina's Dirty War.

During Argentina’s “Dirty War” of the late ’70s and early ’80s, Lorenza and Ramon, two passionate militants opposing Videla’s dictatorship, met and fell in love. Now, Lorenza and her son, Mateo, have come to Buenos Aires to find Ramon, Mateo’s father. Holed up in the same hotel room, mother and son share a common goal, yet are worlds apart on how they perceive it. For Lorenza, who came of age in the political ferment of the ’60s, it is intertwined with her past ideological and emotional anchors (or were they illusions?), while her postmodernist son, a child of the ’90s who couldn’t care less about politics or ideology, is looking for his actual  father—not the idea of a father, but the Ramon of flesh and blood.

Anything goes as this volatile pair battle it out: hilarious misunderstandings, unsettling cruelty, and even a temptation to murder. In the end, they begin to come to a more truthful understanding of each other and their human condition.

No Place for Heroes is an addition to that long tradition of the eternal odd couple—in works ranging from Waiting for Godot to Kiss of the Spider Woman—waiting for their fortunes to change, written by one of the most talented and internationally celebrated authors at work today.

“No Place for Heroes (Nan A. Talese/Doubleday), by Colombian novelist Laura Restrepo, follows a mother and son from Bogotá to Buenos Aires to find the man who was her lover during Argentina’s Dirty War and the father of the now grown boy. Their search becomes the springboard for a politically astute, profoundly humane story of revolutionary love, personal loss, and the promise of reconciliation.”  --Lisa Shea, ELLE

“Restrepo pulls off the narrative with an admirable mix of satirical wit and theatrical tension.” --Fabiola Santiago, MIAMI HERALD

“Restrepo adds a wonderful maternal touch to the "Dirty War", as [a mom]  tries to explain to her son who his father is. Full of wit, charming puns and a constant stream of sharp dialogue.” --C.Lariviere,belletrista.com

“Long considered one of the foremost Latin American writers of our time, the Colombian author shifts her attention south to Argentina in this luminous and delightful novel...Restrepo masterfully portrays the ferocious dance between a mother desperate to protect her son and a son desperate to establish his own strength.  Ultimately, this coming-of-age dance, the winding stories of Lorenza's past and the search for Ramón all converge in a climax as unexpected as it is moving." --Carolina de Robertis, SAN FRANCISCO CHRONICLE