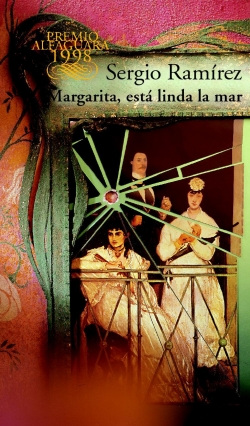 Year: 1998
Editorial: Alfaguara
Language: Español, Catalán
Published at: Stockmann Verlag (Germany),Cankarjeva Zalozba (Slovenia), Difel Difusao (Portugal), Curbstone Press (USA)
Synopsis: In 1907, during an homage ceremony organized at his native town, Rubén Darío wrote on a little girl's fan one of his most beautiful poems, Margarita, está linda la mar. In 1956 a literary circle is devoted to reconstructing the legend of the poet -as well as to political conspiracy. Anastasio Somoza, the Nicaraguan dictator, visits the town with his wife, Doña Salvadorita. A great feast has been organized. And there will be attempted the assassination of the tyrant. Fifty years later, the little girl of the fan is involved in the conspiracy plot.

In this novel Sergio Ramírez collects the whole history of his country, constructing a metaphor from reality and legend. With poetical humour and wit, the author succeeds in creating characters of strong identity: ingenious, and tender, following in the steps of the best Latin American literature.