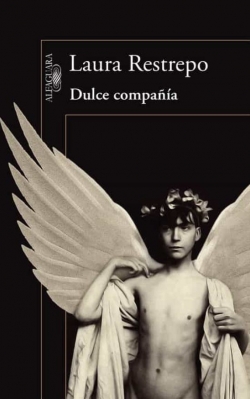 In the poorest of barrios on the outskirts of Bogota, an angel has alighted. Or so the gullible, superstitious locals believe. The angel has already developed quite a following when Mona, a tabloid journalist who once aspired to higher things, arrives to investigate.

This sets the stage for Laura Restrepo’s tantalizing novel of poverty, transcendence, and mystical love. Mona soon discovers that Galilea is split into two camps, the believers and the scoffers, the latter led by a truculent priest who denounces the following as Satanic.

The angel himself turns out to be a strange creature. Living in a cave on a hillside, he speaks only to himself, and no one understands what he says. He uses his mother as a psychic channel and she scribbles down in journals his poetic, apocalyptic thoughts, the tortured outpourings of a being exiled from heaven.

When Mona finally beholds him she discovers that he is a strikingly handsome youth of seventeen or eighteen. She is enthralled by his physical beauty and his magnetism; he does indeed seem to be from a different plane of reality. She instantly falls passionately in love with him.

Is he really an angel? As Mona pieces together the story of the angel’s life—a sorry tale of abuse, neglect, drug addiction, incarceration, epilepsy, and possibly schizophrenia as well— Restrepo keeps the reader guessing. Ultimately, the question is unanswerable. This mysterious tale works on another level altogether, creating a vision of love and divine radiance reaching out and touching even the most wretched of the Colombian poor.

"This barrio angel teaches us how to see behind the appearance of things and how to embrace reality with all the senses, above all with intuition, imagination, faith, and humor."  --Isabel Allende

"Like her fellow countryman, painter and sculptor Fernando Botero, Restrepo uses smoothly inflated characters exuding innocence and sensuality to recount a story rooted in the religious and social traditions of her native Colombia."  --Publishers Weekly

“Surprising, wonderful and, for me, deeply moving.”  --Alvaro Mutis

“Restrepo is a writer to treasure.” --Alastair Reid

“Laura Restrepo breathes life into a singular amalgam of journalistic investigation and literary creation.  Thus, the wretchedness and violence that nest in the heart of Colombian society are always present, but also there are her fascination with popular culture and the play of her impeccable humor, of that biting but at the same time tender irony that saves her novels from any temptation toward pathos or melodrama, and infuses them with unmistakable reading pleasures.”  --Gabriel García Márquez