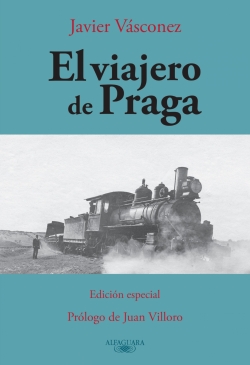 Language: Español, Catalán
Synopsis: In El viajero de Praga the traveler is Josef Kronz, a Czech doctor who pretends to place himself outside of history, and thus embarks on a journey that culminates with him stuck in an Andean heart of darkness, a city like Quito, otherwise the “center” of the world. His baggage and medical bag include his kindness, skepticism, and sensibility to how science and society limit his occupation. As a child Kronz witnessed his mother’s suicide (she was attractive and devoted to the theater), and the subsequent distrust of his father because of that lost still haunts him. He is reminded of other possible ghosts and not very exemplary lives from his Prague period, but we know almost nothing about them, since the narration is consistent with Kronz’s desire to ignore his past, including the political intolerance he experienced.

Much of this plot is presented in dream sequences, with motley characters in carnivalesque or baroque encounters, compounded by the narrator’s subtle hints about how “real” this may all be. Perhaps Kronz’s only reality is his marginality in a foreign country and the freedom to commit to his patients. El viajero de Praga contains passionate stories that in turn contain other stories with betrayal, greed, and secrets that tend to destroy the lives of beings one loves. The frequent dream sequences make readers ask if the protagonist’s trips are real displacements, or if Kronz is daydreaming to flee his life in Prague by seeking refuge in fantasy.