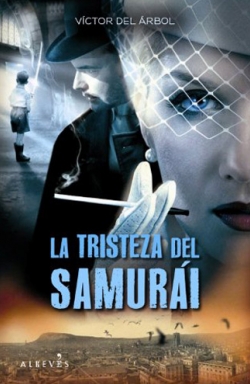 Year: 2011
Editorial: Alrevés
Language: Español, Catalán
Format: Paperback with flaps
Published at: Henry Holt (USA), Jingdong's Books (China), Matica Makedonska (Macedonia), Mondadori (Italy), Editora Scwartcz (Brazil), Trei (Romania), Albatros Media (Poland), Actes Sud (France), De Fontein (The Netherlands)
Synopsis: This is a story of a struggle for power in family and government over the course of three generations. Set alternately in the pro-Nazi Spain of 1941 and the Spanish transition to democracy between 1976 and 1981.

1941. Isabel becomes involved in a plot to kill her powerful Fascist husband only to be betrayed by her mysterious lover who in reality is employed by her husband’s right-hand man. The story turns around this event and how it plays out in the lives of many people, where a Japanese sword (“The Samurai’s Grief”) converges and cuts all.

1976. María, a young lawyer takes on the case that converts her from an unknown, struggling lawyer into a household name: An inspector is accused of brutally torturing a police informant leaving him for dead. María is the defense for Ramoneda, the victim, and she manages to convict the inspector César Alcalá. Throughout the trial Ramoneda is in a coma, and María ignores the fact: César’s daughter had been recently kidnapped, and he went to Ramoneda demanding to know her whereabouts. Though María senses there could be more to the story, she sends César to prison for his crime without investigating the circumstances. Five years later, this act comes back to haunt her, as Ramoneda –and some other people– reappears in her life and she is forced to confront not only her own actions, but those of her father’s past. No one is innocent, everyone suffers for his or her sins, though almost never through the workings of the law. Isabel by loving someone and trying to save herself, caused nothing but pain: her older son is disowned by his father and sent to die; her younger son is put into an asylum and mysteriously disappears for some years. César, in wanting to save his daughter, tortures Ramoneda, changing him in the process from a simple peon into a calculating killer, but he is not the only one.