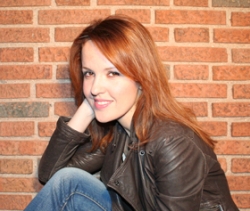 Vanessa Montfort (Spain, 1975) is a novelist, playwright and journalist. She is author of the following play scripts: Quijote Show (The Quixote Show, Madrid 2000), Paisaje Transportado (Transported Landscape, Madrid 2003), Estábamos destinadas a ser ángeles (We Were Destined to be Angels, Madrid 2006); that same year she was awarded the XI Ateneo de Sevilla award for young novelists for her first work El Ingrediente Secreto (The Secret Ingredient, Algaida 2006), earning critical and public praise. During the same year, she was invited to take part in two programmes run by the Royal Court Theatre in London (International Residency for Emerging Playwrights 2007 and Spanish Voices 2008), where she participated in workshops with some of the most important British playwrights including: Harold Pinter, Tom Stoppard, Martin Crimp and Simon Stephens amongst others. Her time in London included the translation into English of the following plays: Flashback (London, 2007), La mejor posibilidad de ser Alex Quantz (The Best Possible Alex Quantz, London 2008) and La cortesía de los ciegos (The Courtesy of the Blind, London 2008).

She has been part of the anthology Jekyll & Hyde (Madrid, 451 Editores 2009), and is author of the essay De Galatea a Barbie: autómatas, robots y otras figuras de la construcción femenina (From Galatea to Barbie: Automata, Robots and Other Figures of the Feminine Construction, Lengua de Trapo 2009). Some recognitions of her work include La orden de los descubridores awarded by St John’s University, New York, the National Award for Living Culture 2009 and the Revelation Author of the Year. Currently she is devoted to literature, offering workshops and courses in Spain and around the world, and she is permanent member of the teaching staff at the Centre for Novelist Training in Madrid. In 2010 she published Mitología de Nueva York (Mythology of New York -Ateneo de Sevilla Award, Algaida 2010) and in 2014 La leyenda de la isla sin voz.