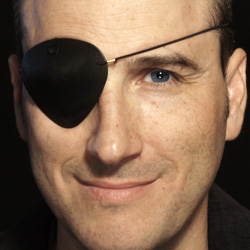 Luis Cerezo (Barcelona, 1969) studied Arts in the Escola Massana and Music at Barcelona’s Liceo. He has combined literature with boxing, musical composition, cameraman, as well as an early career as a jazz musician. For fifteen years he worked as an advertising creative director and film and television screenwriter—activities which he has juggled with musical composition and independent filmmaking.

In 2004, he directs and produces his first experimental full-length film, Náufragos (Shipwrecked). In 2006, he promotes the manifesto Cinelibre (FreeFilm), an alternative production platform inspired on guerrilla cinema, and which fosters solitary filmmaking. Fiesta (Party), his first full-length documentary (2008), was officially selected for the international festivals of Warsaw, Toulouse and Montreal, among others, besides inaugurating the season of Spanish cinema at the Instituto Cervantes in Shanghai and Beijing. In 2013, he directs and releases the full-length film “Plan B”, selected by the Bogota International Film Festival.

In 2014, he wrote his first novel, Eo, which was published in 2015 by Suma de Letras publishing house.