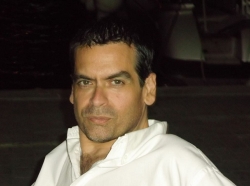 Juan Ramón Biedma was born in Seville, studied Law, and for years has devoted himself to emergency management, an activity that he has combined with that of radio announcer, screenwriter and film critic, as well as collaborating in various publications and anthologies -The Black List, Probation and other stories, Guernika Variations, The Bible-The book, Coven...

God’s Manuscript (Editions B), special mention by the jury during the 2004, II Premio de Novela of Gijón’s Semana Negra, and runner-up to the Memorial Silverio Cañada prize, marks his debut in the field of the novel, kicking off a trajectory that would be followed with The Monster’s Mirror (Editions B)—required reading in Mexico's medical school—and The Magnet and the Compass (Editions B), Hammett, NOVELPOL and Crucedecables awards for the best police novel in 2007. Then came The Transylvania Effect (Roca Editorial) and the graphic novel, Riven, and The Observatory City (Editions B). In June 2010, he published Smoke in the Bottle (Salto de Página), nominated for the Hammett Prize and worthy of the Premio Especial de la Dirección of La Semana Negra 2010, NOVELPOL award and considered by Gangsterera as the best novel of 2010. In February of 2011, Antirresurrección (Ediciones Dolmen) appears, which was nominated for the NOVELPOL 2012 and the CELSIUS award for the best fantasy novel of the year.

In September 2014, he won the Premio Valencia de Novela Negra, awareded by the Valencia Provincial Council for his work Your Magnificent Vengeful Eyes when Everything has Occured, edited by Lengua de Trapo in February 2015.

His books are continually re-edited and quoted, and have a large and unconditional following. They have been translated into Portuguese, Greek, German, Russian and Turkish