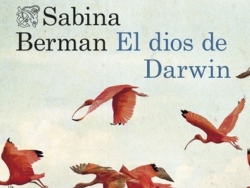 Four years after the release of her first novel, The Woman Who Dove Into the Heart of the World, was published in 33 countries, Sabina Berman returns with El dios de Darwin (Darwin’s God), published by Destino and available on the 23rd of January. Focusing again on Karen, her first’s novel charismatic and lovable main character, and conveying an ecologist message as well, El dios de Darwin is a frenetic thriller based on philosophical ideas, in which the call of a missing biologist leads to a surprising revelation: that Darwin converted into Christianity on his latter days, uniting again science and religion. Sabina Berman will be in Madrid the 22nd and 23rd of January. El dios de Darwin will be presented the 23rd of January at 19:30 in Instituto México (Madrid).