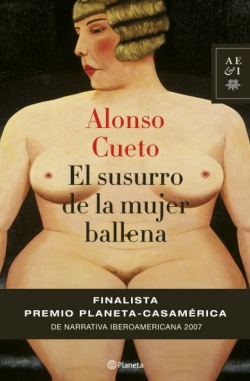 Year: 2007
Editorial: Planeta
Language: Español, Catalán
Published at: BV Berlin Verlag (Germany), Dulnyouk (Korea), Cavalo di Ferro (Italy), Rosspen (Russia)
Synopsis: El susurro de la mujer ballena is the story of Verónica, a successful and attractive woman of 42, who works as a journalist. One night, in the plane that carries her to Lima (Perú), Veronica realises that sitting next to her there is an extremely fat woman, who even needs a special seat belt. After a while, she finds out that the woman is Rebeca, an old school mate. They haven’t seen each other for some 25 years.

They begin a conversation about memories from the school years and soon it becomes traumatic. Rebeca was the girl that everybody laughed at, but now she is a millionaire businesswoman, who owns her own company. Veronica is married, has a son and all seems normal in her life. From the moment that the plane lands and for some days, Rebeca keeps calling Veronica, sees her in cafeterias, in social venues and even follows her in the streets and reminds her of the days she was treated in a humiliating way by her school mates. They both were friends but the last day of classes something happened that moved them apart.

We soon find out that Veronica leads a secret life because she meets her old boyfriend, Patrick, some afternoons. Rebeca finds out and she moves to the same building were Patrick lives and where he and Veronica meet in secret.

From now on, the chance meetings between the two women become more violent and more violent until something happens that unveils an old story. When this moment comes they have already been involved in scenes of fear, violence, reconciliation and forgiveness.

El susurro de la mujer ballena explores the modern tendency towards worshipping beauty and dismissing everything else that doesn’t fit the standards of beauty, and it also explores the notion of friendship between two women, that according to Alonso Cueto is ‘the most complex and intense of all relationships’.