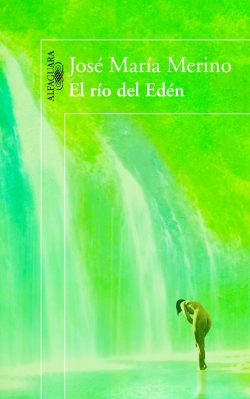 Year: 2012
Editorial: Alfaguara
Language: Español, Catalán
Published at: Perseus (Bulgaria), Thames River Press (UK).
Synopsis: “It is said that a human being takes a little over eight seconds to fall in love, and while you looked and listened to that girl, you felt towards her that invincible desire for closeness, with which love cloaks when it appears.”

In the company of his son Silvio, Daniel travels across the Alto Tajo region. A legendary place where he intends to scatter his wife's ashes. These are the same places in which man and woman, in their first youth, shared a strong passionate love. Along the walk, the man recalls his emotionally-packed love story, betrayal and repentance.

Narrated in the second person, creating both a stream of consciousness and an objective narration, this new novel by José María Merino again grapples with nature's alien and indifferent environments—natural spaces—with that sentimental and moral sorrow which is in the human being's very substance.

The River Eden depicts an affectionate and familiar drama, very much in keeping with the times in which we live, but which nonetheless keeps certain aspects of reality alive, which have been permanent incentives for literary fiction.