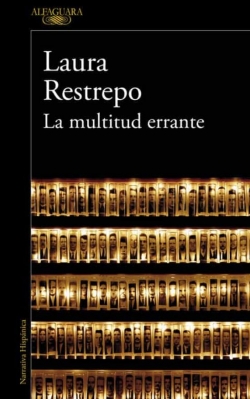 "How can I tell him that he will never find her, after he has been searching for her all his life? If I could talk to him without breaking his heart, there is something I would tell him, in hopes it would stop his sleepless nights and wrongheaded search for a shadow. I would repeat this to him: 'Your Matilde Lina is in limbo, the dwelling place of those who are neither dead nor alive.' But that would be like severing the roots of the tree that supports him. Besides, why do it if he is not going to believe me."

In the midst of war, the protagonists of A Tale of the Dispossessed are continuously searching: for a promised land, a destiny, the face of a woman who has disappeared -- searching for an impossible love and, conversely, for a love that is possible.

A way station for refugees from violence is the setting for an intense love triangle in which an uprooted and wandering people lead the reader to experience the collective drama of forced relocation. A Tale of the Dispossessed speaks to us about the inexorable law that has led man, expelled from paradise since the days of Adam through to modern times, in his search for a way back home.

Praise for La multitud errante/A Tale of the Dispossessed

"This slim volume offers Spanish and English versions of a novella about an encounter between strangers amid political chaos. Set in Tora, Columbia...Thus begins a spare but symbolic love story, a modern-day fairy tale with Freudian trimmings. Restrepo, a journalist, activist and academic, employs a singular, accessible voice that melds her political sensibilities with hints of magical realism. The author has been lauded by Gabriel Garcia Marquez, and this book will fit snugly into the canon of modern Latin American literature.  Even as it describes violence and fear, it shimmers with an innocent charm and a quiet lyricism." --Publishers Weekly

"The fourth from Colombian Restrepo traces an unlikely romance between a displaced man --raised in the hell of the country’s decades-long civil war-- and an outsider...Vividly detailed, a florid fantasy that suggests the miraculous potential of hope and love in the midst of perpetual war." --Kirkus

"Laura Restrepo’s tender new novel...is equally luminous. From the first pages to the subtly suggested ending, love remains the emotion that redeems, and in its shelter lies the only place where peace and hope can exist." --The Miami Herald