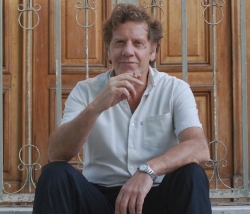 Eduardo Sguiglia (Argentina, 1952) retired full professor from the UBA and the first Argentine Ambassador to Angola. He is the author of several investigative pieces and essays, such as Agustin Tosco and El club de los poderosos (The Club of the Powerful), which received two national awards for economics. His short stories and novels –Fordlandia (Norma, 1997. St. Martin Press/USA, Europa Verlag/Germany and Iluminuras/Brazil), No te fies de mi si el corazón te falla (Don’t Trust Me if your Heart Fails You, Norma 1999) and Un puñado de Gloria (A Fistful of Glory, Grijalbo 2003)– have been translated into various languages and have been highly praised at the Dublin Literary Awards and at the Grinzane Cavour Awards. The Washington Post rated Fordlandia as one of the four best works in fiction in 2002. He was a juror for several literary awards –including the Cuban prestigious Casa de las Americas Narrative Award– and a member of the committee of the 2007 Berlin Literary Festival. Ojos negros (Black eyes, Edhasa 2010) is his latest novel.