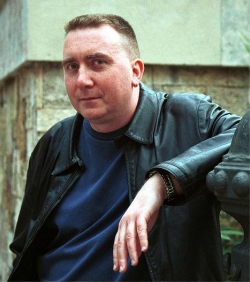 Matthew Tree (London, 1958) learned Catalan, in 1979 started to work as professor of Catalan and finally moved to Barcelona in 1984, where he has been living hence. He has published the novels Fora de lloc (Cafè Central, 1996), and Privilegiat (Columna Prize 2001), which was originally written in English and has been published in Catalan by Columna and in Spanish by Muntaner Editores); as well as the book of stories Ella ve quan vol (Premi Octubre de Narrativa 1999) and the travel book CAT. Un anglès viatja per Catalunya per veure si existeix (Columna, 2000). He is a member of the literary group Germans Miranda, and as such he has contributed to the books of stories Aaaaahhh... Dotze contes eròtics (Columna, 1998), El Barça o la vida (Columna, 1999), Tocats d'amor (Columna, 2000), Contes per a nenes dolentes (Columna, 2001), La vida sexual dels Germans Miranda (Columna, 2002) y Adeu, Pujol (Columna, 2003). He has written for several British and Catalan periodicals and collaborated with Catalan radio and television programs. At present he is a regular contributor to the newspaper El Punt, and the digital edition of Diari de Barcelona. His more recent book is Memòries! 1974-1989 (Columna, 2004).