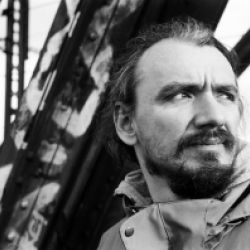 David Llorente Oller grew up in the neighborhood Carabanchel, Madrid Spain. He published his first novel, Kira, en 1998, while he completed his degree in Romance Languages and studied at the Complutense University in Madrid. Kira won, that same year, the II Francisco Umbral Short Novel Award.

His second novel, The Buffon, was awarded in 2000 the Ramón J. Sender narrative Award. In 2002 the author moved to the Czech Republic to work as a professor of Spanish language and literature at the bilingual center Gymnázium Budějovická in Prague, where he currently teaches.

His experience in the Czech capital is reflected in his third novel; I Offer Myself to Die in Prague, published in 2008.

His fourth novel, published in 2011 in bilingual Spanish-Czech format, titled; From the Hand of the Dead Brother/ Ruku v ruce s mrtvým bratrem.

David, since his arrival in Prague, has directed a Spanish theater group, which presents a play every year that he has written. One part of the theater production is collected in the book; The Sleeping Trees, published in 2009. His most recent works are Te quiero porque me das de comer (I love you because you feed me, Alrevés 2014), Madrid: Frontera (Madrid:Frontier, Alrevés 2016), and Kira (new edition from Alrevés, 2017).

He also occasionally works as a Czech-Spanish translator.