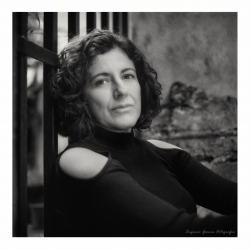 Catalina Murillo attended the International Film School (EICTV) in Cuba to study audiovisual scripting, which is where her calling as a storyteller arose. Upon her return from Cuba, she wrote the chronicle of the trip, "Long Cuban Sunday", and finished a career in Communication Sciences at the University of Costa Rica. She soon migrated to Spain, her other homeland. She lived in Madrid for a decade, working as a film and TV scriptwriter, and as a teacher at the Fuentetaja Workshops.

She currently resides in Costa Rica, where she has mostly opted for narrative. She has published the novels "Almighty March", "Tremble", "Memory" and "Maybe Managua"; the chronicle of Galician prints "Corredoiras" and "Vertical Eloísa", a non-fiction book based on the hallucinated and hallucinatory life of a Galician schizophrenic. Is Murillo, a "multi-purpose" writer, as Sergio Ramírez claims, and she has also written a play, "Dulcinea Herstory", which was performed at the National Theater of Costa Rica.

From 7 to 17, she studied at the French Highschool. Ever since she was a child, she has been writing stories, diaries and a mural newspaper, "Spine-chilling", in the corridors of her house.