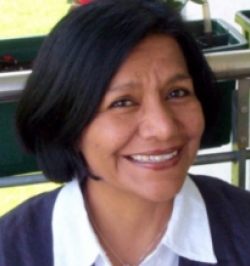 Sandra Sabanero studied Political Sciences and Public Administration in the Autonomous University of Mexico (UNAM) and finished a post-graduate at the National Institute of Public Administration (INAP). At the Technical University of Stuttgart, Germany, she began a doctorate in Political Sciences, with a scholarship from the “German Academic Services Exchange” (DAAD). As well as working in the Mexican banking system as a technical and financial advisor and at the Confederation of Mexican Workers (CTM), she worked as an educationalist at the Faculty of Economics at the Central American University of San Salvador (UCA). Since 1993 she has written short-stories, children’s books and poetry. She is the author of the novels “Boda Mexicana”, (“Mexican Wedding”)—published in Germany by Wolfgang-Krüger-Verlag (1999), and later translated into Portuguese (Diefl y Circulo de Leitores), and into Spanish (Ediciones B)—, “La Alcaldesa”, (“The Mayoress”), (Vergara edt.), and “El Balcón de las Gardenias” (“The Balcony of Gardenias”) (Difel y Circulo de Leitores). After long periods of time in Malawi (East Africa), Guatemala, El Salvador and Bolivia, she now lives with her husband and two children close to Stuttgart, Germany.

Published at: Ediciones B - Vergara