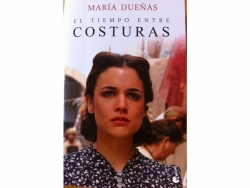 Last Friday, the 6th of September, television networks Antena 3 and Boomerang TV presented the pilot episode of the series El tiempo entre costuras (The Seamstress), during a party for the Vitoria-Gasteiz Television Festival (FesTVal). The adaptation for television of the novel written by María Dueñas and translated into more than 30 languages, is the much anticipated Autumn Prime Time launch for Spanish television.

From Bestseller to TV success

<< El tiempo entre costuras (The Seamstress)>> is going to have the same success as the book has. The story of Sira is exciting and it has everything one could wish for entertainment: romance, adventure, passion, betrayal, unforgettable moments from our History, danger… Through the life of the protagonist, we don’t only pass through part of Spanish History but also all of the feelings and emotions that a human being can go through. You are magically struck with empathy for Sira. <>, commented Adriana Ugarte.

Editorial Planeta published a special edition for the series on its Booket label (paperback). We can get a glimpse, on the cover, of Sira Quiroga, played by the actress Adriana Ugarte.