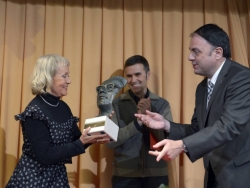 The writer, translator and journalist Monika Zgustova has won the Amat Piniella Prize for her latest novel La nit de Vàlia (Valia's Night), published last year by Proa in its original Catalan version and by Destino in Spanish translation. Valia's Night fictionalizes the true story of artist Valentina Grigorievna, wrongly acused of spying and sent to the gulag, who tries to recover her life and find her true love after many years of captivity. The prize, granted by Òmnium Cultural and the Council of Manresa to a published work that shows a "social concern for the contemporary world", was awarded by majority; Zgustova's novel was selected over titles written by authors such as Margarida Aritzeta, Pere Rovira and Núria Cadenes. The author, who was born in the Czech Republic but has been living in Catalonia for more than thirty years, crowns with this award a splendidly solid career.