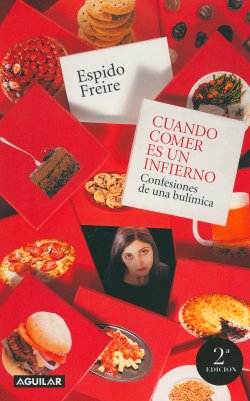 Year: 2002
Editorial: Aguilar
Language: Español, Catalán
Synopsis: Bulimia nervosa is an eating disorder characterized by repeated bouts of binge eating followed by purging (usually by vomiting or laxative use) in order to avoid weight gain. Repeated binging and purging may cause disturbances of body electrolytes, heart attacks, erosion of the teeth and other serious mental health problems, like depression, and suicide. Espido suffered from bulimia when she was a teenager, and in this book she collects the experiences of several women and how this illness has altered their lives. She also investigates about the internet dimension of bulimia (web pages, blogs, and chats). A sincere and impressive book that many psychologists use during their therapies.