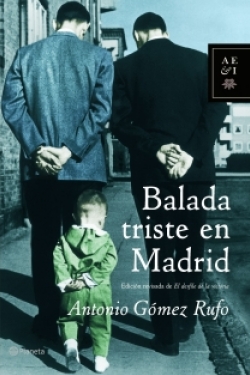 Year: 2005
Editorial: Planeta
Language: Español, Catalán
Synopsis: The great novel about the Madrid of 1953, when the postwar period depicted a Madrid in black and white. In Mrs. Amelia’a small hotel life throbs underneath a subjugated Spain. On the street, the expectation of the echos from the military boots ready to celebrate the Francoist victory drowns the sounds of life; but inside, human contact becomes, inevitably, a hotbed of desires and hope.

Meanwhile, Ernesto Bacigalupe, a Spanish anarchist just arrived from France, walks the streets overwhelmed by the weight of history, which he intends to carry on his shoulders. He has decided to kill Franco and thus clear Spain’s horizon; but he does not know, not even suspects it, that it is the past that is lurking in every corner: in the small hotel of Mrs. Amelia the daughter he abandoned years ago is waiting for him.

“Gómez Rufo has built a Madrid with Zarzuela elements, with a royal and stifling presence of an exultant regime and a world of small hotels with aromas of chic-pea stews. There is, throughout the novel, which can be read in one go, an homage to the Spanish cinema of the times and there is also, on occasions, a grotesqueness of situations that have a lot to do, in their choir-like sensations, with Berlanga’s cinema, that Gómez Rufo also knows well—and with black humor, too.”