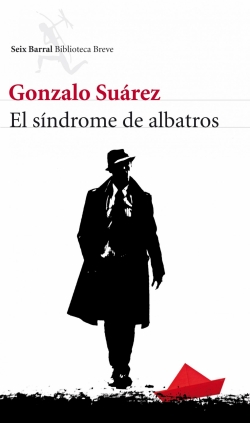 Year: 2011
Editorial: Seix Barral
Language: Español, Catalán
Synopsis: A criminal and literary investigation that is determined to uncover who, some fictional characters are and what roles they play… in reality. A widow discovers the manuscript of an obscene play that her deceased husband had secretly written. Intrigued by the discovery, she hires a writer to investigate the possible existence, beyond fiction, of one of the feminine characters from the play, a young girl whose eroticism arouses the widow’s curiosity and jealousy. Like a detective from a crime novel, Ernesto Zóster decides to accept this unusual assignment, but a succession of events will convert him into a suspect. Is his involvement a type of madness or has he fallen into a trap? Zóster recounts his true story in The Albatross Syndrome, a novel that transgresses reality by means of humor and the unexpected.

Gonzalo Suárez returns to the novel freer than ever, loyal to his unique style. An original voice that penetrates into a first rate criminal and literary investigation.

With him, the reader is part of the experiment.” Juan José Millás

“With Gonzalo Suárez something terrible happens to me:

His books are burned in my memory” Max Aub