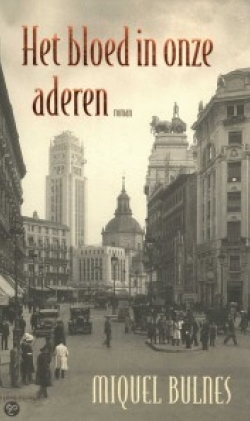 Year: 2011
Editorial: Uitgeverij Prometheus
Literary Category: historical fiction
Language: Dutch
Format: Paperback with flaps
Published at: Netherlands
Synopsis: The summer of 1921. Deep in the Rif Mountain Range, the Moroccan Berbers are revolting against the Spanish occupiers. In a matter of days, they force the Spanish army to retreat to the coast causing a true blood bath. The young captain Augusto Santamaría is one of the few to escape. He barely survives his injuries, but will be an invalid for the rest of his life and can never return to the army. He is appointed as commissioner with the Madrilian safety corps. After years of military campaigns in Africa, Santamaría finds civilian life to be deeply unsatisfying. His military reputation means nothing and his work seems more symbolic than meaningful. But all this changes when the political turmoil grows and several of his colleagues are found murdered. It seems that there is a place for him in the new Spain after all.

“A riveting novel to be read on the sofa and be engrossed over an entire weekend.” Vrij Nederland

“Bulnes holds the reader's attention during each one of the novel’s six hundred pages.” HP/ De Tijd

“An amazing novel. (…) Bulnes has established himself with The Blood in our Veins in the map of the young promises of Dutch literature. Het Parool.