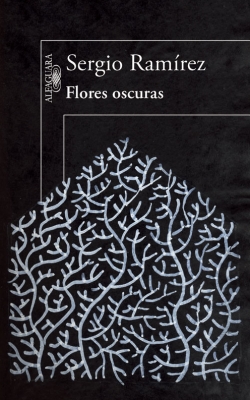 Year: 2013
Editorial: Alfaguara
Literary Category: tales
Language: Español, Catalán
ISBN: 9786071125354
Format: Paperback with flaps
Pages: 226
Published at: México
Synopsis: «There are things that happen only once in a lifetime»

The judge and his Conscience, the unrivaled Mireya and the flame-eater Luzbel, the Fairy that journeys to the Skull’s throne, the dandy and the devil, the last battle of the lightweight champion Gavilán, the luck of the ex-guerrilla Trinidad alias “El Comandante”… In Dark Flowers, each character fights against their personal conflicts and hides their own secrets. Halfway between a chronicle and a short story, Sergio Ramírez peeks into the mysteries of the human soul in twelve surprising short stories full of living colors and dark shadows.

«Once he broke through the surf he balanced over the spine of the grey waters facing the sky, and seemed to enjoy it. We could finally see him raise his hand, which could have been easily mistaken as a happy greeting to his wife who was knee deep in the water, careful with her fifth month pregnant, until the reflections of sunshine, an intense trial of silver scales in movement over the surface of the water, no longer let us see him. (…) A joker. That’s what he was. Surely he was swimming back to shore under the water, hiding himself, and would son appear by her side sticking his head out of the water in the midst of a wave of foam that splashes everywhere.

«None of this happened.»

«The best living story teller in the Latin American continent, and one of the best in the Spanish language, heir to the souls of Cortázar and Monterroso… For each story a world..»

«Sergio Ramírez is in his element writing stories that  never tire one from sharpening the pencil of life, taking unusual approaches- that end up changing a banal event into something surprising- and acclimating humor to daily catastrophes with great skill».