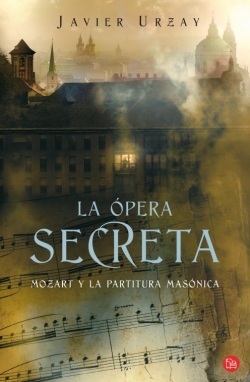 Year: 2007
Editorial: Suma
Language: Español, Catalán
Synopsis: Vienna, November 2006. Paul Rosenberg, a civil servant that works for the Austrian Union of Federal Theatre Houses, and a frustrated musicologist, receives a letter from Wolfgang Amadeus Mozart. A young girl who reminds him of his past will put him on the track of a daring hypothesis in the field of mozartian studies. According to this clue, the Austrian genius composed an opera that was never released and its manuscript was lost. The letter could demonstrate the existence of that work. Both protagonists begin the quest to find the manuscript, which will take them to Prague, where they find a tangible clue of its existence. The time comes to take this unprecedented discovery into the public light…

Vienna, December 1785. Wolfgang A. Mozart is called to the Palace, where he receives an assignment from Emperor Joseph II: he shall compose a new opera in German that praises the values of Reason and educates the people. The assignment is part of the Emperor’s own cultural and sociological policies, framed in his reformation of the State, that was supported by the masons of Vienna (of whom Mozart was a member). What nobody can suspect is that Pope Pius VI will use all the resources of the Church to oppose the project and make it fail.