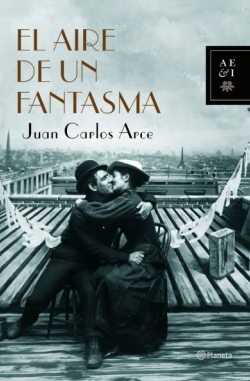 Year: 2006
Editorial: Planeta
Language: Español, Catalán
Synopsis: Paris, 1890. It is the city of the Impressionists, of the Moulin Rouge and the can-can, the city of ‘la bohème’. The Eiffel Tower is being built… And it is also the frame of our story, a story of hopes and wishes: Argibay, a Spanish student, abandons his studies of Medicine to become a painter and falls madly in love with Catherine, a young prostitute, who teaches him how to kiss. An impossible love, or maybe not…

Toulouse Lautrec, Gauging or Van Gogh struggle to become ‘professional painters’ while their works are not yet admired and they try to survive in a hostile Montmartre.

And, above all, the city is also the scenery of the hopes of Joaquín Prereyra, a diplomat who will manage to bring back to Spain the mortal remains of Francisco de Goya, the Spanish master, after he unveils the enigmas enclosed in the painter’s grave, in Bordeaux.

El aire de un fantasma investigates the beheading of Goya as well as his corpse’s curious and many burials, and recreates the air of the fin-de-siècle in the world of the bohemians.