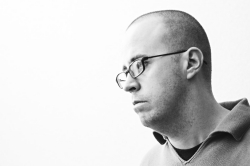 For nine years he combined his work as a programmer with that of writing. At twenty-five he made his debut as a novelist with El paso de la hélice (The Passing of the Propeller, 2004, 2014).

Afterwards he published La mitad de uno (Half of One, 2006), El lienzo (The Canvass, 2009) and La Lluvia de Ionah (Ionah’s Rain, 2016). His work has been hailed by the international critique and published in countries such as France, Russia, China, Brazil, Japan and The Netherlands, among others. His work as a scriptwriter has also earned him more than a hundred awards around the world. Un libro de familia (A family book, 2018) is his latest novel.