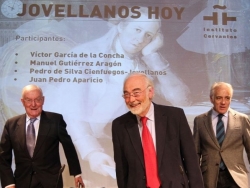 Juan Pedro Aparicio changes the direction of his career, lately focused on short stories, and publishes the work on which he has been working for the last 10 years, Nuestros hijos volarán con el siglo (Our Sons Will Fly with the Century) (Salto de Página), the story of the turbulent escape from Spain of Gaspar Melchor de Jovellanos, in a ship, the Volante, that had to face a wild storm and the assault of a group of pirates in what became an 8-day odissey. The portrait of the statesman, a mixture of historic and adventure novel and biographical profile, allows us to track the seeds of the present in events that took place more than 200 years ago, and details us the complex personality of a politician that rejected the francophilism that was customary in those times, influenced instead by British politics and confronted to the Church because of his views. The book was presented last 20th of November in Madrid’s Instituto Cervantes, in an act that counted with the intervention of renowned personalities such as the novelist and filmmaker Manuel Gutiérrez Aragón, the professor and Cervantes’ president Víctor García de la Concha and Pedro de Silva Cienfuegos-Jovellanos, descendent of the politician. Writers such as Luis Mateo Díez or José María Merino were amongst the audience.