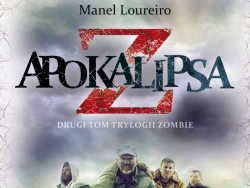 0
"Apocalipsis Z" in Poland and Galicia

This Christmas, two books of Manel Loureiro's zombie trilogy have been published in Poland and Galicia: Apocalipsis Z. Los días oscuros saw the light of day as Apokalipsa Z. Mroczne Dni, published by Muza, and Apocalipsis Z. El comienzo del fin turned itself into Apocalipse Z. O comezo da fin, published by Urco Editora. The trilogy, which Loureiro posted at first in a blog and then, after having been read by more than 1,5 million people, was published by Plaza y Janés, has been translated into English (Amazon Crossing), French (Panini France), Italian (Casa Editrice Nord Sud), German (Heyne Verlag), Portuguese (Ediçoes ASA in Portugal and Editorial Planeta do Brasil in Brasil), Slovak (Premedia Group), Hungarian (Konyvmolykepzo Kiado), Turkish (Monokl), Japanese (T. O. Entertainment) and Korean (Minumin), and has seen the light of day in other Spanish-speaking countries such as México, Chile or Argentina, becoming an unanimous success that has turned it into one of the Spanish best selling works in digital format all around the world. A film and a TV series are currently in the works.