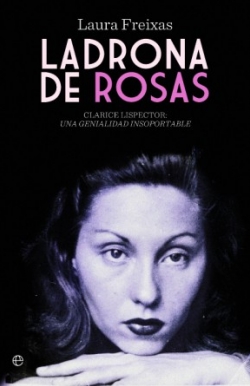 Year: 2010
Editorial: La Esfera de los libros
Language: Español, Catalán
Synopsis: “She is as pretty as Marlene Dietrich and writes as well as Virginia Wolf!” ejaculated impressed, on meeting her, whom would later be her English translator.

Indeed, her beauty is the first thing that struck one’s attention on setting eyes on Clarice Lispector (Ukraine 1920 – Brazil 1977). But that spectacular appearance of hers—she was pretty, elegant, exotic, with the perfect manners of the wife of a diplomat—hid many things. Her origin for starters: Clarice was Jewish (a fact she would often hide) and that she’d been born with a another name and on a different date than the one given for years in her official biography, or that she originated from a small Ukrainian village, where her parents, broke, persecuted and frightened to death, fled from the ravages of the Russian Civil War and the pogroms that followed the Revolution.

But, what Clarice Lispector, really hid, denied or tried to diminish for a long period of her life was her condition as a writer. She preferred to be thought of as the diplomat’s wife, a mother, an ignorant housewife who only read detective stories… Nevertheless, few lives have been as marked as hers by a tenacious, obsessive, literary vocation. Her first novel, Near to the Wild Heart (1944), caused a great stir in Brazilian literary circles for its originality. However, the next went by unnoticed: they were difficult works, and she, following her husband, had to live very far from Brazil… It was a long “crossing of the desert” —years of loneliness and failure—that put her vocation to the test… After her divorce in 1959, Lispector returned to Rio de Janeiro and published her most emblematic works: The Passion According to G.H. (1964), The Stream of Life (1973), The Hour of the Star (1977) and a handful of short stories that earned her the well-deserved reputation she now enjoys: that of a great artist, that stands amongst the most extraordinary writers not only of Brazil in the twentieth century, but of the history of letters.