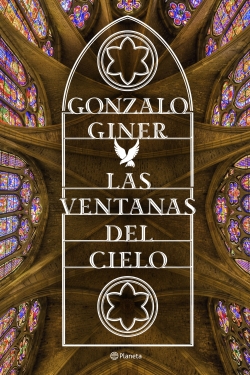 Year: 2017
Editorial: Planeta
Language: Español, Catalán
Format: Hardcover
Pages: 734
Published at: Blanvalet (Germany), Società Editrice Milanese (Italy), Sonia Draga (Poland), Planeta (Portugal)
Synopsis: Fifteenth century, Hugo de Covarrubias decides to renounce to the destiny that his father, a wool merchant, has marked for him. This decision makes him leave Burgos, but also Berenguela, his intimate friend, and her ambitious stepbrother Damian, who yearns to take control of the family business. But everything changes when he discovers that his father is being betrayed. He is forced to flee for his life in a Basque whaling ship, in which he meets Azerwan, a fascinating man who describes himself as a storyteller and with whom he will share a promising business of selling salt in Africa.

Vengeance makes him flee once again, this time around with a woman, Ubayda, and an extraordinary falcon, Aylal, in search of his true destiny: to learn the art of making stained glass windows.

An epic and adventurous novel that takes place in such different scenarios, such as the north African desert, the unexplored Terranova and some of Europe’s most thriving nations of the period (Bruges, Louvain or Burgos) and their cathedrals, all at a time when their ancient walls start opening, to become authentic glass tabernacles, before which the believers felt as if at the feet of the windows to the sky.